The Changeling by Victor LaValle

This beloved little gem of a book fell into my hands in the most delightful of ways. My mother went to NYC to visit my younger brother, and they scored some free tickets to The View (I’m already seething with jealousy at this point). While at the taping, fucking KWEEN Whoopi Goldberg went through the bestseller’s list and gave every member of the audience six of the top books of the year (jealousy has reached max capacity). Fast forward to my LOVING MOTHER wearing 4 jackets and 3 pairs of pants in LaGuardia Airport in order to get those suckers home in her carry-on, because my family is thrifty and we’ll be damned if we’re paying $60 to check our goddamn luggage, you ignorant fools. When she got home, she split the books between myself and my fellow book-loving sister, and it was like goddamn Christmas all over again. And that’s exactly how The Changeling fell into my lap, and changed my shitty little life for the better.

THIS BOOK. Ugh. How does one explain The Changeling, honestly. It’s like Grimms’ Fairy Tales mixed with the magic of Harry Potter, combined with the raw emotion of Jane Austen. I physically c-a-n-n-o-t explain how much I enjoyed this medley of fucking literature. Let me explain.

The story follows Apollo Kagwa, who was abandoned by his father at an extremely young age. All that Apollo had left of his father was a box of books marked “IMPROBABILIA”. Flash forward to the future, and Apollo is happily married to his wife, Emma, and they have a beautiful newborn son together. Life is fucking peachy. That is, until Emma loses her shit and commits an unspeakable act, and is never to be seen again… or so you think. The rest of the story follows Apollo’s odyssey through New York, through both physically real and imaginative lands, on a mission to find his wife. The quest takes a turn when Apollo runs into a man who claims to know the whereabouts of Emma, and shit fucking hits the ACTUAL FAN. And its goddamn glorious.

This book is better than your typical, run-of-the-mill classic fairy tale. Victor LaValle is skilled in the art of making you feels things you weren’t aware your cold, dead heart was capable of feeling any more. His writing style is emotionally devastating in all the best ways, and I truly cannot recommend this book more. I want to stand on top of a mountain and scream it to all the land. READ THE CHANGELING. Marry me, Victor LaValle. You beautiful little bastard.

Click here to buy The Changeling and shove your nose in it ASAP. Then come back here and tell me how much you enjoyed it, too.

The Hate U Give by Angie Thomas 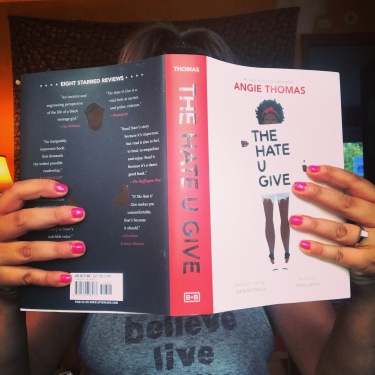 Hello people! Between living in a literal construction zone while my fiance flips our house, and planning/entirely procrastinating our wedding, I haven’t been reviewing nearly as much as I would like to. I need two of me, but I’m not quite sure this world is ready for two Gretchens…. things would burn, people would die. Shut up and act like I never left.

The past few months as I’ve been casually scrolling through my bookstagram to avoid planning our wedding (told you, I’m not lying), The Hate U Give by Angie Thomas was the subject of 70% of the images I found. Instantly intrigued. Also, the cover is cute as fuck. So naturally, I purchased the book immediately and flew through it in about two days, because nerd. You guys… dis book. It’s one of the novels you begin reading and then proceed to immediately text all of the fellow book-addicts in your phone, making sure they buy it literally that second so they can share the adventure alongside you. That happened with this book, and trust me when I say there is no feeling more exciting for someone who loves stories as much as I do. The Hate U Give even has a 4.63 star rating on Goodreads. I’ve never seen a star rating that high, because Goodreads is filled with cynical assholes like myself, who no matter how much they enjoy a book will always believe it could have been better. Except for this 444-page wonder. Seriously.

The story follows Starr Carter, a sixteen-year old teenager who constantly switches between two worlds: the poor, “ghetto” neighborhood she lives in, and the fancy prep school her parents send her to.  Although she had successfully maintained this balance since a young age, everything is completely torn apart when she witnesses the shooting of her childhood best friend at the hands of a police officer. The story follows Starr as she is put on trial as the star witness and in turn, gives you an entirely different perspective on situations similar to the one she has found herself in. I demand that this book be required reading for people of all ages. It helps you to see the other side of any story, and is beyond eye-opening. I truly believe people can mentally grow just by reading this story. Everyone could use this little lesson in empathy.

Hello, ’tis me! After a stupidly long hiatus, I’m back with a vengeance. Watch my video below, I reviewed my May Owlcrate for all my little nerds out there.

These Three Strong Literary Women Will Kick. Your. Ass.

It’s International Women’s Day, which is just the excuse I’ve been looking for to fangirl the fuck out of some of my favorite female literary characters. As a child, kids used to bully me because I wore dresses my mom used to buy from garage sales. They literally called me Garage-Sale Gretchen. Obviously I was ahead of the curve (I’m talking to you, thrifters). Now, don’t get me wrong. 26 year-old Gretchen is overly grateful for being put through that torment when I was younger. I firmly believe I am the badass woman I am today because I learned to value myself and say “fuck you” to anyone who thinks I’m anything less than amazing. But 8 year-old Gretchen… she had a rough time. I would sit in my room for hours everyday, consumed by book after book. It was these three fearless women that gave me strength to ignore the haters and boldly wave my middle finger straight up in their faces.

Let me premise this by saying I actually thought I was Matilda when I was younger. The amount of hours spent staring at inanimate objects trying to move them with my mind is nothing short of embarrassing. I wanted goddamn telekinesis. I still want goddamn telekinesis and you’re lying if you say you don’t. But that’s besides the point. Matilda escaped from the bullies of her world, albeit her family, by keeping her nose stuck between the pages of books and exploring imaginary, far-off lands on the reg. Girl was on to something, I’m telling you. 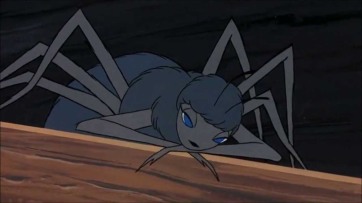 Bet you didn’t see this one coming. Honey, you bet your ass I looked up to a spider growing up, and for good reason. Charlotte taught me the importance of encouraging your peers and being there for one another regardless of the circumstance. Wilbur wasn’t shit without that damn spider saving his curly-tailed ass from arriving on the farmer’s plate as a steaming pile of bacon. Women: saving men even in arachnid form. God damn. 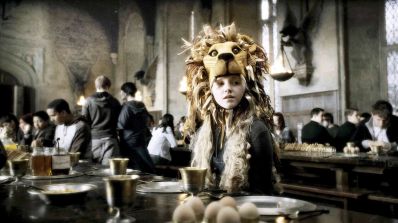 While I love me some Hermione Granger, Lovegood is what’s up. Luna’s relentless optimism is inspiring beyond words. She watched her mother die when she was nine years old and remembers the entire thing. That alone should be enough to create the world’s largest cynic, yet she remained fearless and hopeful throughout the entirety of the Harry Potter series. People mocked her for her outfits and her spunky sense of style (HELLO, GARAGE-SALE GRETCHEN). She didn’t give a fuck if people stared and laughed at her because she was too busy doing her own thing. In the face of adversity one of the hardest things to do is remain true to yourself, and she did it without a second thought. She was one of the driving forces behind Dumbledore’s Army and if she didn’t stand her ground in the face of fear, Voldemort may have never been defeated. Side note, Luna is a huge contender for my future child’s name because I want a Luna Lovegood of my own to snuggle and high-five forever.

And there you have it, folks. My list of women who kept me sane while everyone else was being gigantic dickheads. In your faces, because I’m goddamn spectacular. Never forget it.

A very happy International Women’s Day to men and women alike. Go hug your mothers. “Here’s to strong women. May we know them, may we be them, may we raise them.” 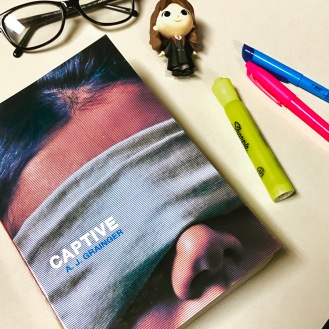 Something about Stockholm Syndrome really jazzes my beebo, youknowwhatimsayin’? No? What? Why are you looking at me like that? I promise I’m not a psychopath, but reading books about kidnappings where the victim falls in love with their captor is one of my all-time favorite subjects in the galaxy. Okay, so maybe I’m slightly psychotic, but the topic is miraculously captivating. My favorite book I’ve ever read is The Good Girl by Mary Kubica; if you haven’t read it yet, pull up Amazon right now and fucking buy it. So when I was at work the other day and my coworker busted me googling “best reads on Stockholm Syndrome”, two things happened. 1) I’m certain she now thinks I have someone chained up in my crawlspace and 2) Captive by A.J. Grainger popped up on my browser.

Grainger slays. She took my love of prisoners held in captivity who find “love” and multiplied it by one thousand (again, it’s becoming more and more apparent that I may have psychological issues). IT’S FINE. Captive follows Robyn, the daughter of the fictional Prime Minister of Britain, as she is kidnapped and held for ransom by a group of animal rights activists. This book has been glued to my eyeballs for the past two days; I officially deem it impossible to put down.  Robyn ends up falling for one of her kidnappers, and I did too, so who am I to judge her life? You do you, boo-boo.

Also, I would like to point out that I would struggle not falling for my animal-rights-activist-kidnapper. Yeah, he might have taken me against my will, but ANIMALS!  I feel worse for homeless animals than I do homeless people, 100% of the time. And animal testing can kiss my non-existent white ass. Give me all the bunnies, the monkeys, the mice and the rats. I will house them all in my 1,000 square-foot house and we’ll live happily ever after, the end.

Captive held my undying attention from start to finish and I couldn’t recommend it more without screaming the words directly into your eardrums, straight into your cerebellums. It’s a quick and easy read, and I cried when I finished it like the emotionally unstable child I am.

Wanna buy Captive by A.J. Grainger? Click here and embrace the cute little psychopath inside of you.