Considering my life is currently being destroyed by a non-fiction book about murder and Craigslist hookers, I decided it’s time to create a post about the love of my life, the one and only John Green. If you’ve been living under a rock for the past five years and hate everything that’s good in the world, you might not be aware of exactly who this glorious bastard is. This beautiful piece of man has single-handedly written several of the world’s greatest young adult books and I’ve read each one nothing short of one billion times. The Fault in Our Stars, Paper Towns, and my personal favorite, Looking for Alaska, are just three of the novels that have young adults everywhere crying and screaming and Googling random facts about Green like his kid’s names, home address, etc… no? Just me? That’s not awkward. I’m fine with it.

Last June, John Green started a charity donation page that enticed you to donate money to the PEN/Faulkner Foundation, a “nonprofit literary organization that promotes a lifelong love of reading and a connection to writing through public events, in-school education, and public promotion of exceptional literary achievement.” Whoever donated the largest cash sum would be FEATURED in his next NOVEL. Believe me when I tell you I contemplated putting lien on my own car in order to cough up as much cold hard cash as humanly possible. This 100% would have happened had my boyfriend not threatened to kick me out… even still, being in a John Green novel is totally worth being homeless, in my opinion. I love him. I love him I love him I love him.

Even if you haven’t heard of him, I guarantee you have heard some of his most famous quotes. I can’t spend one solid 24-hour period on Facebook without seeing some drunk bimbo post an inspirational quote of his AND THEY HAVE NO IDEA WHERE IT EVEN CAME FROM. THIS IS A CRIME. Do I dare prove my point? You bet your ass I’m going to. 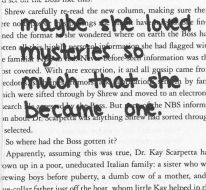 Waking up next to a stranger with last night’s makeup smeared all over your pillowcase does not make you a mystery: you a hot mess. And there’s nothing wrong with being a hot mess, I take great pride in my binge drinking. But stop using this quote if you haven’t read Looking For Alaska because you’re infuriating me and millions of other nerds across the globe. Sending drunk text messages and fucking your shit up does not mean you’re mysterious, you are out of control and could probably benefit from a healthy dose of rehab. Always remember: your friend posting inspirational quotes definitely got into some messed-up shit last night. Words to live by.

Here’s a couple of random facts about my future husband (I will home wreck his life one day). Green was born and raised in Indianapolis, and I’m from the suburbs of Chicago so that means we’re basically neighbors and best friends and we have dinners on Sundays and our lives are perfect. John and his brother created the YouTube Channel VlogBrothers and I love YouTube, so again, we’re pretty much soul mates (side note, if you haven’t watched any of their videos, click here and thank me later). AND ON TOP OF IT, THEY FRICKEN FOUNDED VIDCON. If you’ve never heard of VidCon and you’re an internet junkie like myself, prepare to be amazed. VidCon is kind of like ComicCon, but rather than superheroes, at VidCon the fans gawk at, take selfies with and get autographs from YouTube Stars. AKA my heaven (Jenna Marbles is spirit animal).

In all seriousness, John Green is by far one of the best role models for young kids and teenagers. He prides himself on being a nerd and wants kids everywhere to do the same. Growing up, I was constantly teased and bullied for not being “cool”, and consequently spent the rest of my high school years trying so unbelievably hard to be accepted. If I had discovered John Green back then, I know my 15 year-old self would have benefited in hundreds of different ways. A few years ago I was fucking around on the internet as per usual and I stumbled upon a quote of Green’s that hit me like a semi:

Christ on a mother-effing cracker. Need I say more? Embrace your inner nerd, people. Be strange. Be awkward as heck. Be a freak of nature with me and love every second of it. Life is so much better when you’re a weirdo.

Click here to purchase my husband’s wonderful books. We really appreciate it.

I may not hit rock bottom but I'll sure slap the hell out of the walls. Lover of cats and all things furry/impassive. I'm not worried about the wrinkles around my smile: I prefer my puns intended and my laugh is funnier than my jokes.
View all posts by readwithg →
This entry was posted in Literary Shit and tagged author, author review, bae, book review, books, future husband, green, john green, looking for alaska, nerdlife, paper towns, read, read with G, the fault in our stars, will grayson will grayson, writer, young adult, young adult books. Bookmark the permalink.